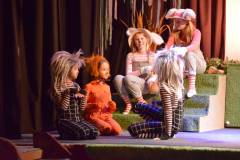 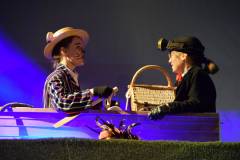 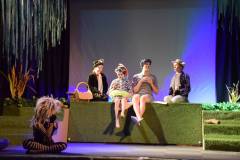 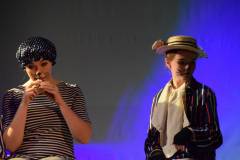 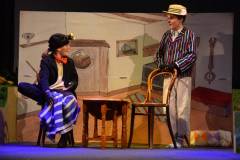 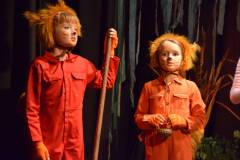 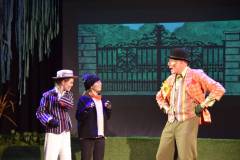 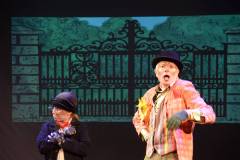 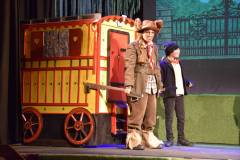 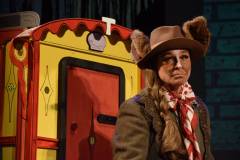 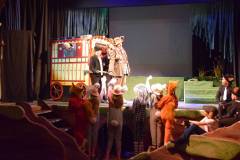 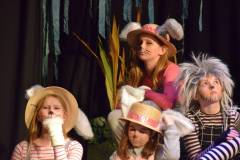 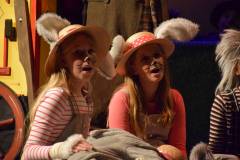 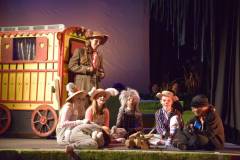 When Alan Bennett adapted Kenneth Grahame’s much-loved classic The Wind in the Willows he said: “The play is quite a formidable undertaking and presents many problems which future casts and directors will solve in different ways.”

Wedmore Theatre faced the challenges of this ‘formidable undertaking’ head on. Undaunted by the difficulties of recreating the beautiful riverbank, complete with moving boat and barge and animal homes, the highly skilled set constructors, artists, prop designers and makers gave us some magical scenery in a rather restricted village hall setting.

Naughty, silly Toad – played brilliantly by the energetic David Eccles – was given a pretty, traditional caravan before he moved on to the pièce de résistance: his red sports car.

As Producer Sue Rippon explained, it was the quality of the script that attracted such an array of local acting talent – both adults and young people.

The animals – played mostly by the younger actors – hopped around from the riverbank to the frightening wild wood. Their costumes were inspired and as they got into character, scratching their ears and twitching their noses, it was obvious that they were enjoying their Wind in the Willows’ experience.

Grown up cast members included Axbridge performer Nigel Newton, who gave a great performance as Badger – the character whose ‘bark is much worse than his bite.’
Ren Fayers was thoroughly entertaining as Albert the put-upon horse, playing him as per Alan Bennett’s stage instructions: ‘a Wolverhampton cousin of Eeyore’.

Full marks to younger actors Matilda Friend, as Rat, and Gabriel Todesco – Bond who played Mole. Their portrayal of the two friends – the caring, responsible and sometimes pedantic Ratty looking after the excitable and eager young Mole – was a delight.

The cast of 30 were codirected by Carrie Large and Kathryn McGill. Memorable scenes included the prison escape where the hilarious Toad was persuaded by Gaoler’s Daughter Libby Tucker to swap clothes with Washer Woman Will Ewens.

The whole cast threw themselves into the well-directed rowdy court scene which was presided over by Wedmore Theatre stalwart Jendy Weekes as the Magistrate. Meanwhile, the banter between Chief Weasel (Zoe Folland) and Weasel Norman (Sam Kolind) was fun.

The Bargewoman was played by Georgina Sweet whose appearance in Wedmore came on the eve of her performance at London’s O2 Arena in the finals of the Open Mic UK ‘Teen Star’ competition.

And if Wedmore Theatre’s The Wind in the Willows is anything to go by I think a few more stars will rise from the village hall stage in the future.