“Four Dames, A Fairy and A Big Bad Wolf”

We are preparing to re-start rehearsals for the Community Panto – “Four Dames, a Fairy and a Big Bad Wolf” – in September, and we thought we’d kick off by getting the whole team together for a little social ‘bash’ in Wedmore Village Hall, with drinks and nibbles, to celebrate the end of lockdown and discuss plans for resuming work on the panto.

As well as the existing re-united team of actors and backstage creatives, we’d like to invite any other members of the community who may have decided, during the past dreary year, that they would enjoy getting involved in a fun, creative, community enterprise when the virus lets us all out to play! This might especially be of interest to village newcomers who have moved in over the past year.

The party is from 5.30 – 8.30 on Sunday 25th July in Wedmore Village Hall, and all ages (from 8) are welcome who would like to meet some new people and find out more about Wedmore Theatre and future projects, including this autumn’s panto.

Regular rehearsals resume in early September, and performances are in Wedmore Village Hall from Thursday 25th to Saturday 27th November. We are hoping that, by then, we should be able to sell the full number of tickets – up to 140 – for each performance, instead of the 45 or so that would have been allowed under last year’s Covid restrictions.

Despite having been postponed twice, the panto is alive and well. The show will go on! After all, our set and costumes are designed, our songs and lines are learned, and our cast is half-rehearsed (if there is such a state!)

Below are some rehearsal photos taken from our work on the show last summer.

David and Venetia Hopkins play Mummy and Daddy Bear, with David Eccles and Matilda Friend as Baby Bear and Goldilocks. David and Venetia get even more up close and personal later in the show as Friar Tuck and Little John! 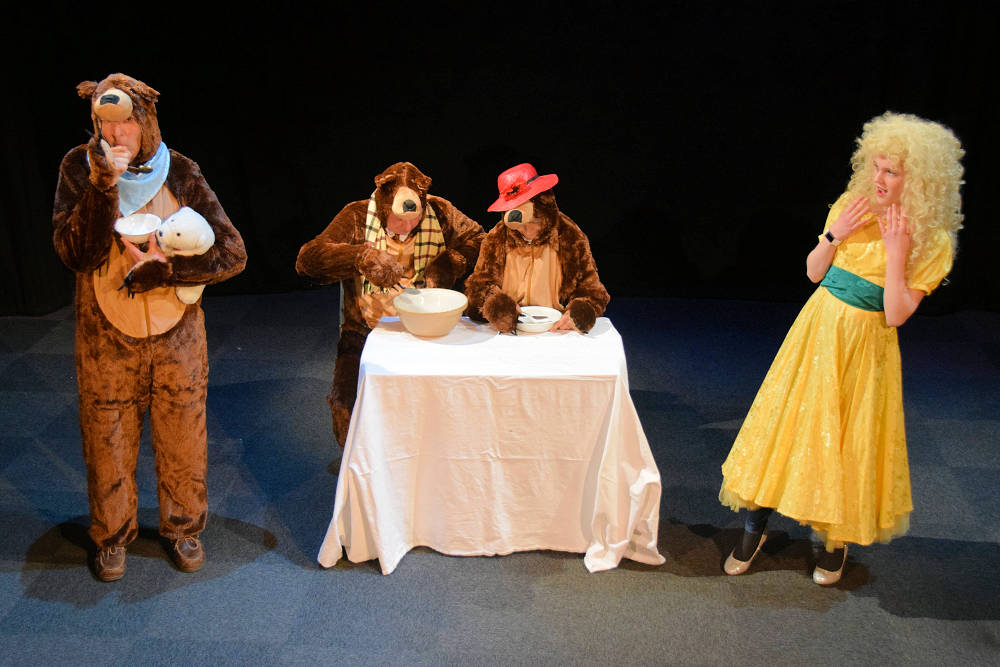 Then we have 6’6” Will Ewens playing the Big Bad Wolf opposite his diminutive daughter Ruby’s Little Red Riding Hood – so small she can get her whole head between the Wolf’s Great Big Teeth! Elsewhere Will plays Widow Twankey, with 7 year-old Ruby as Twankey’s long-suffering second husband, Merv.

Will also plays one of the two Ugly Sisters, with David Eccles as his opposite number, who deals with social distancing by wearing a patent ‘keep away!’ girdle armed with hands that fend off anyone who comes too close. Designed and made by the incredible Philip Hamlin, who also made the Wolf’s head for us.

And, of course, there is an appearance by Special Guest Star Dame Edna Everage (one of our 4 Dames) who also, perhaps unexpectedly, shows up as The Mirror in Snow White and as The Genie in Aladdin. A woman of many parts!

Limiting the number of actors to 6 in each scene has led us to augment the cast through puppetry. As well as a life-size puppet Hen Who Lays Golden Eggs – in Jack and the Beanstalk – we introduce for the first time a range of fabulous shadow puppets, an example of which is shown below. Designed and created by Anne Richards, and operated onscreen by puppeteer Greg Phillpotts, they bring a unique and innovative magic to many of the scenes, as well as extended opportunities for silly gags.

And that, after all, is what panto is all about, isn’t it? A series of silly gags wrapped around well-loved fairy stories and traditional tales.

Four Dames, A Fairy and a Big Bad Wolf

We welcome back Michael Hackett and Johnny Wardlow who were an enormous hit last time they performed here back in 2019. In Wedmore Village Hall CLICK HERE to buy tickets